Animals have always been a part of Jennifer Steketee’s life. Growing up on a small farm in Oregon, Steketee found it only natural to be around dogs, cats, horses, rabbits and other creatures.

“I was around animals all the time,” she said. “Just about everything you can imagine, and it’s what I 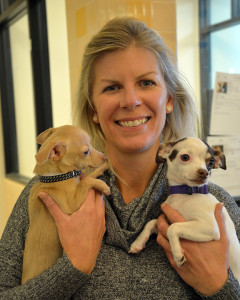 So when she pondered a career path, she followed her passion. After getting a doctor of veterinary medicine at the College of Veterinary Medicine at Oregon State University, Steketee found herself working at Española Valley Humane Society and eventually at a private veterinary practice in Santa Fe.

But it was her work with homeless animals, and, specifically, animal sheltering, where she found her true calling. She started full time as a clinic veterinarian at the Santa Fe animal shelter in 2012, and eventually accepted the role as director of medical services. She helped institute lifesaving changes in the way the shelter handles the care of homeless animals.

In November, Steketee was selected as executive director of the shelter after a nationwide search for a successor to Mary Martin, who left in October to take the helm of Maricopa County Animal Care and Control in Phoenix. Martin, who was appointed executive director in 2009, expanded the shelter’s programs and services to the community, adding a public veterinary hospital, an animal rehabilitation center and two resale stores that help support shelter programs.

Board President Roddey Burdine, in announcing the board’s selection of a new executive director, said, “We at the shelter are sad to lose Mary Martin after so many years of inspiring guidance, however, we enthusiastically back Jennifer Steketee as the perfect person to be our new ED and to move the shelter ahead and solve our animal problems.”

Martin was a person who forced people to look outside the box, Steketee said, and fundamentally changed how the shelter was run, which was to give every animal a chance to succeed. During Martin’s time, the shelter was able to increase the number of animals it helped save, and has been at an about 95 percent success rate for many years.

“Mary was a visionary who took this shelter to places we hadn’t even imagined,” she said. “Now it’s time to make those visions sustainable for the long future ahead. The shelter has spent 75 years changing the way our community sees animals, and I am honored to be part of its future. There is no limit to what a group of passionate, driven animal lovers can accomplish.”

The shelter takes in more than 5,500 animals yearly and has a staff of about 100. In addition to the shelter facilities at 100 Caja del Rio Road, and the resale stores in the north- and south-side of town, the shelter also operates a spay/neuter and wellness clinic and a pet outreach program at its south-side location, 2570 Camino Entrada. Steketee said it’s the employees and volunteers, lead by the steadfast dedication of the board that has allowed the shelter to blossom as a national beacon for animal welfare.

“I’m amazed every day at what everyone brings to the table,” she said, “and how much hard work goes into our organization. There are so many things that people do here – so much that people don’t realize – that everyone should be applauded for their work.”

In addition to Steketee’s lead role at the shelter, the shelter also announced that Laura Parker, a longtime New Mexico resident, is now director of finances. Parker, who succeeds Robert Hernandez, who died in July, is a CPA and has been doing income taxes in public accounting since 1994. She has served as treasurer on the shelter’s volunteer board since 2007.

The shelter also has a new medical director, Sara Lewis. Lewis started her career in fine arts, but, after being inspired to “give back,” started volunteering at the shelter.

She eventually moved on to the clinic, where she began a love affair with veterinary medicine and in particular, she said, shelter medicine. She recently finished veterinary school at Washington State University and decided to return to the place that gave her a start.

Steketee said she is working to ensure that lifesaving programs at the shelter continue and that more options are available for people to keep their animals in their homes, either through reduced veterinary costs, behavior help or assistance in fence repair. She would like to encourage more people to visit the shelter.

“I would love to get more people involved in the shelter,” she said, “people from different walks of life. I would like everyone to know about the amazing work that we do here and become part of it.”

Looking for something special? You can look for it in our alphabetized sitemap .
En Espanol»